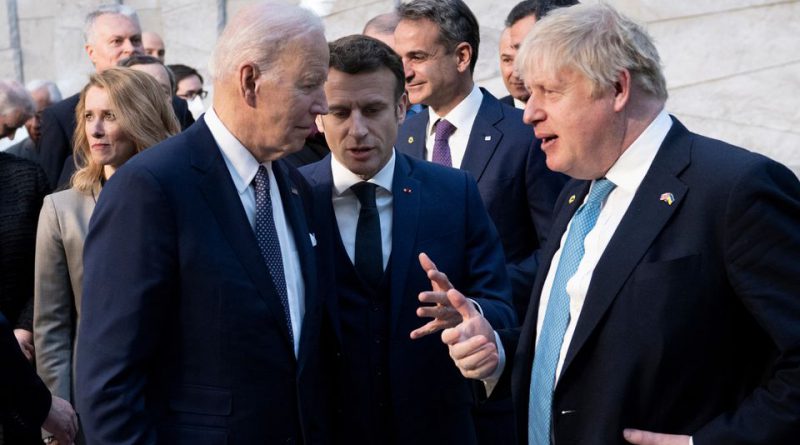 Brussels (Reuters) – Western leaders meeting in Brussels on Thursday will agree to strengthen their forces in Eastern Europe and increase military aid to Ukraine as the Russian assault on its neighbour entered its second month.

Ukrainian President Volodymyr Zelenskiy urged them to go further and repeated his call for a no-fly zone over his country, where thousands of people have been killed, millions become refugees, and cities pulverised since Russian President Vladimir Putin unleashed his invasion on Feb. 24.

UNICEF said on Thursday that more than half of Ukrainian children had now been driven from their homes.

In Mariupol, the besieged southern port that has come to symbolise Ukraine’s plight, people were burying their dead.

In a part of the city now captured by Russians, a patch of grass between charred hulks of blasted apartment buildings had become a makeshift graveyard, with freshly-dug mounds marked with plastic flowers and crosses made from broken window frames. The thud of explosions could be heard in the distance.

Viktoria was burying her 73-year-old stepfather Leonid, killed when the car ferrying him to a hospital was blown up 12 days ago.

“This guy had taken a seat instead of me and then they all got blown up in that car,” she told Reuters, pointing to the mangled remains of the vehicle.

“It could have been me,” she sobbed.

Hundreds of thousands of people have been hiding in basements in Mariupol with no running water, food, medicine or power. Ukrainian officials accused Russia on Thursday of having forcibly deported 15,000 people from the city to Russia. Moscow denies this.

In a month of fighting, Ukraine has fended off what many Western military analysts had anticipated would be a quick Russian victory. So far Russia has failed to capture a single major city. Its armoured columns have barely moved in weeks, besieging cities in the east and stalled at the gates of Kyiv, taking heavy casualties and running low on supplies.

Ukrainian officials say they are shifting now onto the offensive in much of the country. On Thursday they said their forces had destroyed the “Orsk”, a large Russian landing ship near the Russian-occupied port of Berdyansk on the Azov Sea.

Video footage, which Reuters was able to confirm was filmed from the shore inside Berdyansk, showed a column of smoke rising up from a blaze beside a dock in the port, and the flash of an explosion. Russian officials did not immediately respond to requests for comment.

In a sign of Western unity, leaders gathered in Brussels for a day of emergency summits of NATO, the G7 and the EU.

“We must ensure that the decision to invade a sovereign independent country is understood to be a strategic failure that carries with it ruinous costs for Putin and Russia,” Canadian Prime Minister Justin Trudeau told the EU parliament.

U.S. President Joe Biden, rallying allies on his first trip aboard since the war began, will unveil new sanctions. The first U.S. shipment from a new, $800 million arms package for Ukraine will start flying out in the next day or so, a U.S. defence official said.

Zelenskiy, who will address the NATO and EU summits by video conference, said he expected “serious steps” from Western allies. He repeated his call for a no-fly zone, although Western leaders have rejected this.

The Ukrainian leader, who has won admiration across the West for his leadership under fire, also urged people around the world to take to the streets in support of Ukraine.

“Come from your offices, your homes, your schools and universities, come in the name of peace, come with Ukrainian symbols to support Ukraine, to support freedom, to support life,” he said in a video address.

Tens of thousands of people are still believed to be trapped inside Mariupol under Russian bombardment, having had no access to food, power, water or heat since the war’s early days. Satellite photographs from commercial firm Maxar showed massive destruction of what was once a city of 400,000 people, with residential apartment buildings in flames.

Journalists have not been able to report from inside the Ukrainian-held part of Mariupol for 10 days, during which time Ukraine says Russia has bombed a theatre and an art school being used as bomb shelters, burying hundreds of people alive.

In the Russian-held part of the city, trucks arrived with food supplies in cardboard boxes bearing the “Z” logo that has become the Russian symbol of its “special operation”. Hundreds of people, many elderly, had emerged from the surrounding ruins, queuing in stony silence as men in Russian emergencies ministry uniforms distributed the boxes.

Angelina, a young mother of two, said she had received bread, nappies and baby food.

“It’s difficult to leave by bus now. We hope the number of people trying to get out will go down and it will get easier for us to leave,” she said.

To counter troop shortages, Moscow was moving in fresh units close to the Ukraine border and calling up soldiers who had recently served in Syria, it said.

Zelenskiy repeated he was ready to have a face-to-face meeting with Putin to end the war.

“We are ready to discuss the terms of the ceasefire, the terms of peace, but we are not ready for ultimatums,” he said. 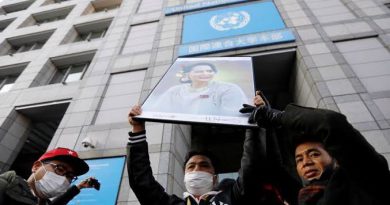 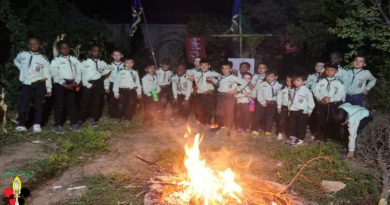