Istanbul (Reuters) – A Turkish court sentenced German-Turkish journalist Deniz Yucel in absentia on Thursday to jail for 2 years and 9 months for terrorism propaganda, his lawyer said, in a case that has strained ties between Ankara and Berlin.

Yucel, who denied the charges against him, returned to Berlin in February 2018 when he was released from custody after being kept in jail for a year without indictment.

The court ruled that he was not guilty of sedition or of spreading propaganda for the network of Fethullah Gulen, a U.S.-based cleric accused by Ankara of plotting a 2016 failed coup.

The court also filed additional criminal complaints against him for insulting President Tayyip Erdogan and for insulting the Turkish Republic and its agencies, Ok said.

“This is a political verdict,” Yucel wrote in Die Welt newspaper after the verdict.

“In the end I don’t care about it… I was arrested for doing my job as a journalist. And I don’t regret doing that at all,” he wrote.

Erdogan’s international critics have questioned the independence of Turkey’s judiciary, especially since a crackdown after the attempted coup in 2016.

They say the government used the coup as a pretext to quash dissent, with Turkey one of the biggest jailers of journalists globally. Erdogan and his AK Party say the measures are necessary given the security risks Turkey faces, and courts make independent decisions.

Ok said Turkey’s highest court had already ruled that articles written by Yucel on which the charges were based were within the remit of his freedom of speech, and the lower court had violated the law by not abiding by that ruling.

“(Judges) convict anyone who writes news on topics the ruling party does not want – on Kurds, on Armenians. This is confirmation that there is no press freedom in Turkey,” he said. 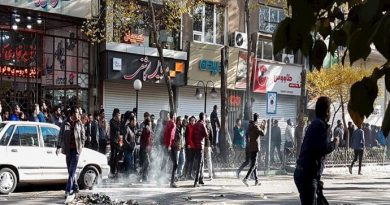 Iran: A timeline of stories from the November 2019 uprising