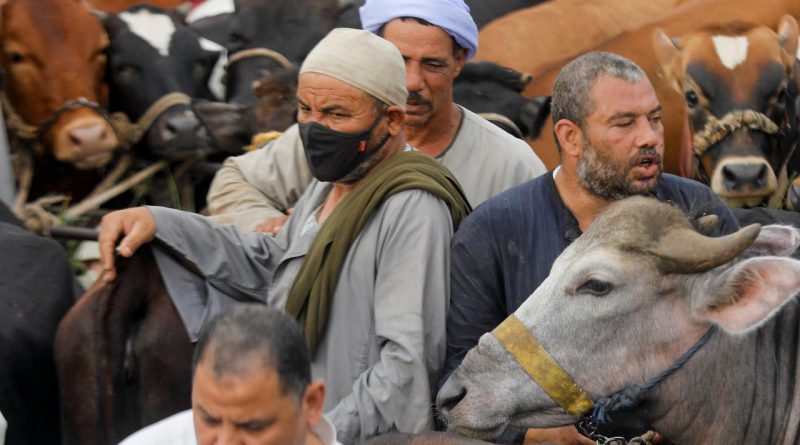 Cairo (Reuters) – Thousands of Egyptians defied government warnings over the coronavirus on Thursday to crowd a vast seasonal livestock market near the capital, without wearing face masks, a week before the Muslim Eid Al-Adha holiday.

Muslims slaughter cows, sheep or goats to mark the holiday, which commemorates the account of the prophet Ibrahim, or Abraham, offering to sacrifice his son on God’s command. The meat is shared among family and friends and donated to the poor.

The Al-Manashi livestock market in Giza is usually crowded with sellers and buyers before Eid, and the pandemic did not reduce their numbers, but few had much money to spend.

‮”‬As you can see, the livestock are lined up down there. There has been neither buying nor selling,” said trader Ahmed Abdel Rasoul.

He and others said they had lowered their prices but that even then, buyers were scarce.

“I will not be able to buy anything with the money I have,” said Mansour Abdel Alim, an employee from the nearby Qalubia province who had sought to buy a sheep to symbolise the eventual sacrifice made by Ibrahim instead of his son.

Traders also complained that local authorities were carrying out periodic raids to disperse crowds for fear they could spread the disease. Officials have urged people to wear masks to limit transmission and said the face coverings must be worn on public transport and in shops.

In mid-March, Egypt imposed lockdown measures including a night curfew, bans on large public gatherings and the closure of restaurants and theatres. It has lifted most of the measures since late June.

So far it has registered 89,745 coronavirus infections, including 4,440 deaths. Daily case numbers have been declining over the past two weeks.